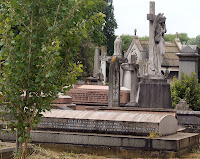 I recently visited Kensal Green Cemetery in search of the burial plot of William Barnicot’s father. William has a lovely old stone in the Hong Kong Cemetery and having researched the whole of William’s life I was keen to find where his father lay. However, that is a whole different story and one that is far too long to relate in a short blog. Having found the site I was looking for I took myself off around this famous West London cemetery fascinated by the wonderful old tombs many of them to individuals with connections to the East – Alexander Nesbitt Shaw of the Bombay Civil Service, Sir William Casement of the Bengal Army etc. etc. Then I remembered that there was an inscription here honouring a man who has been on the periphery of my research for many, many years – Charles MAY.

The Hong Kong Police was established in 1845 by three Metropolitan Police officers from the East End of London – Charles MAY, Thomas SMITHERS and Hugh McGREGOR. Charles spent some 34 years in Hong Kong and is mentioned in all the history books - so being rather “famous” I always felt there would be nothing further to find on him. My attention has always focused on Thomas Smithers and Hugh McGregor and after years of research I feel as if I know the Smithers family inside out. But before I get side tracked let’s return to Charles MAY.

After spending the majority of his life in Hong Kong Charles died on his passage back to England in 1879. He had been accompanied on the voyage by his daughter and no doubt it was she who had to watch as her father was buried at sea just before the ship reached Singapore. The MAY family were highly respected in London for Charles’ father, John MAY, had been appointed to the Metropolitan Police at the time of its establishment way back in 1829 and held the prestigious position of Superintendent “A” Division. He worked alongside the two Commissioners of Police – Sir Charles Rowan and Richard Mayne who had their offices in a private house at No. 4 Whitehall Place.

I knew that the MAY family tomb was somewhere within this West London cemetery and I had a very rough recollection of what it looked like but with thousands of graves, and much of the cemetery overgrown, what was the chance of finding it? I would say virtually nil. However, I have always been of the very firm belief that if somebody wants to be found then they will call me to them – or at least allow me to find the historical documents that tell their life stories. In this instance I needed to be led to some specific spot within the cemetery so I continued to meander first down the central avenue and then up a side path here or a side path there. I had no idea where my feet were leading me. After a while I rested on a handy parapet, relaxing and savouring the awe inspiring architecture of the Victorian tombs around me. Suddenly I was aware that the inscription on the side of a tomb right in my line of vision contained the words “Charles” and “John May”. Would you believe it – there was the very tomb I was hoping to find.


Charles, son of the above John May/ Chief Magistrate of Police, Colonial Treasurer and for 34 years in HM Civil Service in Hong Kong China/ died on his homeward passage 25 April 1879 aged 61 buried at sea.I can only say that Charles certainly wanted me to find him!!!!