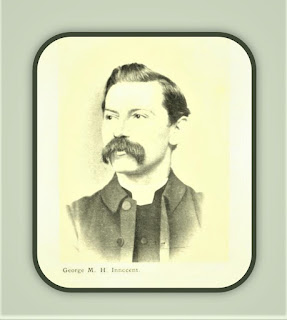 George Morrison Hallam INNOCENT was born in Northumberland on 24 July 1859, the son of the Rev. John INNOCENT, founder of the Methodist New Connexion Mission in China.  George was just three months old when his parents took him to Tientsin and it is said that he was the first English child ever seen in the city.  At the age of seven his father took him to Shanghai and handed him over to a friend, a ship’s captain, who had agreed to take him to England for his education.  George was placed in a school in Blackheath founded for the education of missionaries’ sons.  He went on to be a teacher in a various schools in the north of England before taking up his missionary work in China.

During 1889 the Yellow River flooded large areas of Shantung destroying villages, crops and lives.  The floods were followed by famine and George was heavily involved with relief work. The following account is taken from “John Innocent: A story of Mission Work in North China” by G.T. Candlin published in 1909.

“To spend week by week in the heart of such horrors, to toil over difficult roads from village to village in a jolting mule cart, or, as was often the case, to reach the sufferers over miles of flooded fields in a clumsy little cobble-boat, to look upon their ruined homesteads, the mud walls washed away by the cruel waters, the roofs torn off to buy wherewithal to stay the pangs of hunger, to pass in review, by the hundred, their haggard faces, to see them eating their wretched repast, composed solely of weeds and willow leaves, to dole out to them by family groups the allotted pittance, and feel with a pang how little was the help you could give after all the effort made, it is not easy to imagine anything that could demand greater physical exertion, or put a severer strain on the human heart.

The people were selling their houses, selling their land, their wives, their daughters, scattering as fugitives, often such of their possessions as they could carry away with them heaped upon a wheel-barrow, to beg enough to keep body and soul together.  The whole surrounding country was full of them, and they were well nigh as unwelcome as they were pitiable.

Through all these scenes George behaved like a hero, never wearying in the merciful work of relieving distress, and his furlough was delayed two years on account of it.  Not until the cloud lifted in 1891, the floods disappeared and the harvest fields began to wave again with rich grain, did he quit his post for the rest to which he was more than entitled.”


During his leave in England George married Florence Elizabeth Pottinger.  They left England to return to China on Easter Sunday 1892.

“The passage was a very happy one at first but midway on the journey he was seized with haemorrhagic purpura.  At Singapore he went ashore hoping that a day on land would do him good.  But he was restless and soon returned.  From that time he got rapidly worse and it appeared certain that he must break the journey at Hong Kong.

But alas!  before Hong Kong was reached the end came.  Shortly after one o’clock on Monday May 30th. he passed quietly away.  …………    All through that sad and woeful night the ship laboured through lashing seas, with slow and hearse-like movements, into port.  At the earliest dawn, with her flag at half-mast she entered the beautiful harbour of Hong Kong, and that day George INNOCENT was buried in Happy Valley Cemetery.

It is a beautiful spot where he is laid at the extreme end of the cemetery, high up on the hillside, trees and shrubs and flowers of every form and hue bloom there in perpetual summer, birds of tropical plumage hover in the branches and carol to the evening sun.  It looks upon the rock-girdled harbour and the coming and going of ships;  it is always rich with fragrant odours and cool with flashing and sparkling fountains;  it is set far from the touch of winter’s frosty finger and autumn leaves never lie brown on the bright paths which meander through its recesses of everlasting green.”

Little did the writer know that eighty years later that beautiful hillside would be carved away for the Aberdeen Tunnel.  George’s grave came within a whisker of being exhumed. 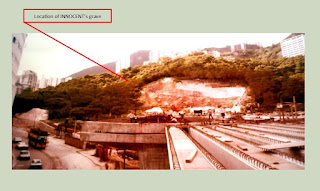 In the 21st. century the grave lies undisturbed at the far end of this hillside section.  In summer the ferns and shrubbery creep over the low flat headstone whilst in autumn it is covered with falling leaves. 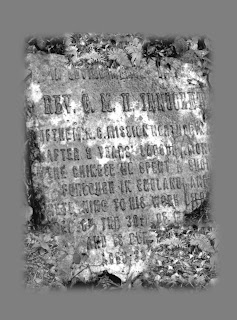 In loving memory of
Rev. G.M.H. INNOCENT
of the M.N.C. Mission, North China
after 9 years labour among
the Chinese he spent a short
furlough in England and
returning to his work died
on the 30th. May 1892
and is buried here
aged 33 years


But it is still a very beautiful spot for those who have the energy to climb the steep hillside. 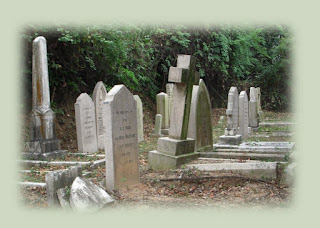